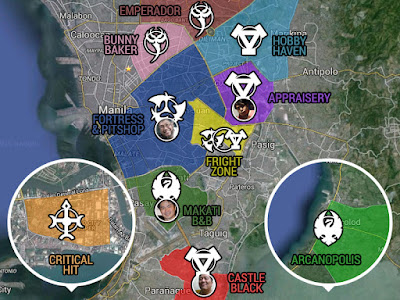 Tracking battles and faction influence in the Philippines! The map is comprised of game results from battle reports posted here on the WARMACHINE Philippines blog.

You score 1 point for your faction for every game played, and gain additional points for every win, as shown below:

The war that is tearing the Iron Kingdoms apart has been spreading, touching the islands of the far east.

The wartime industries of Khador have constructed a massive military stronghold in the region known as Muntinlupa, its solid bastions made of polished black stone. Forces of the Protectorate of Menoth continuously make attempts to breach these walls but Castle Black still holds firm.

The empire of Skorne has established a solid foothold in the region called Project 8, an area rich with massive beasts that fall upon Skorne's barbed whips. The Emperador fortress is in constant attack by warbands consisting of Gatormen Posse, Bog Trog Ambushers and all manner of beasts from the Blindwater Congregation.

South of Project 8, in the war-ravaged land of Katipunan, where all factions, it seems, constantly contest the resource-rich land of Hobby Haven. Khadoran forces have been constantly assailed by Trollbloods, whose numbers appear to have been steadily growing. The grasp of both factions on Hobby Haven further lessened by attacks from Cygnar, Convergence of Cyriss, Legion of Everblight, Protectorate of Menoth, and even from the northern Emperador Skorne and Blindwater Congregation.

Aggressive in expansion, Skorne also invades the beat down lands of Bunny Baker, albeit information on the sporadic fighting in that region has yet to be confirmed.

Seizing a great opportunity, the Legion of Everblight takes hold of the central lands of Critical Hit, fighting off splinters from Trollbloods, the Protectorate and Skorne.

You can view the WMH Philippines spreadsheet here.


Thanks for reading and in advance for the +1! For any comments and questions, please feel free to do so on the Comments section of this post. Good luck, have fun and always bring your ace game! 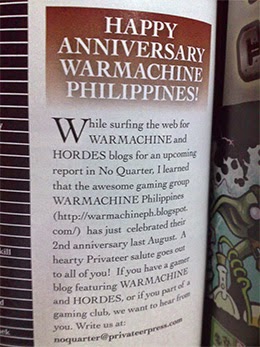